Toward an imminent extinction of Colombian glaciers? 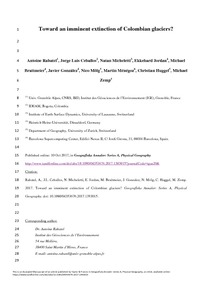 Toward an imminent extinction of Colombian glaciers.pdf (1,019Mb)
Share:

Huggel, Christian
Zemp, Michael
Document typeArticle
PublisherTaylor & Francis
Rights accessOpen Access
ProjectACTIVIDAD DE LOS VOLCANOES EN PREDICCIONES CLIMATICAS ESTACIONALES Y DECENALES (MINECO-CGL2015-70177-R)
Abstract
This study documents the current state of glacier coverage in the Colombian Andes, the glacier shrinkage over the twentieth century and discusses indication of their disappearance in the coming decades. Satellite images have been used to update the glacier inventory of Colombia reflecting an overall glacier extent of about 42.4 ± 0.71 km2 in 2016 distributed in four glacierized mountain ranges. Combining these data with older inventories, we show that the current extent is 36% less than in the mid-1990s, 62% less than in the mid-twentieth century and almost 90% less than the Little Ice Age maximum extent. Focusing on Nevado Santa Isabel (Los Nevados National Park), aerial photographs from 1987 and 2005 combined with a terrestrial LiDAR survey show that the mass loss of the former ice cap, which is nowadays parceled into several small glaciers, was about −2.5 m w.e. yr−1 during the last three decades. Radar measurements performed on one of the remnant glaciers, La Conejeras glacier, show that the ice thickness is limited (about 22 m in average in 2014) and that with such a mass loss rate, the glacier should disappear in the coming years. Considering their imbalance with the current climate conditions, their limited altitudinal extent and reduced accumulation areas, and in view of temperature increase expected in future climate scenarios, most of the Colombian glaciers will likely disappear in the coming decades. Only the largest ones located on the highest summits will probably persist until the second half of the twenty-first century although very reduced
CitationRabatel, A. [et al.]. Toward an imminent extinction of Colombian glaciers?. "Geografiska Annaler: Series A, Physical Geography", 2018, vol. 100, núm. 1, p. 75-95.
URIhttp://hdl.handle.net/2117/115865
DOI10.1080/04353676.2017.1383015
ISSN0435-3676
Publisher versionhttps://www.tandfonline.com/doi/abs/10.1080/04353676.2017.1383015
Collections
Share: