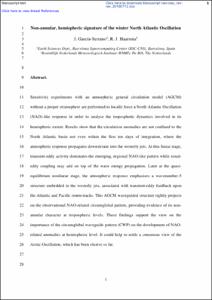 Show full item record
García-Serrano, Javier
Haarsma, Rein J.
Document typeArticle
PublisherSpringer International Publishing
Rights accessOpen Access
All rights reserved. This work is protected by the corresponding intellectual and industrial property rights. Without prejudice to any existing legal exemptions, reproduction, distribution, public communication or transformation of this work are prohibited without permission of the copyright holder
ProjectDPETNA - Dynamics and Predictability of the ENSO teleconnection to the Tropical North Atlantic (EC-H2020-655339)
Abstract
Sensitivity experiments with an atmospheric general circulation model (AGCM) without a proper stratosphere are performed to locally force a North Atlantic oscillation (NAO)-like response in order to analyse the tropospheric dynamics involved in its hemispheric extent. Results show that the circulation anomalies are not confined to the North Atlantic basin not even within the first 10 days of integration, where the atmospheric response propagates downstream into the westerly jets. At this linear stage, transient-eddy activity dominates the emerging, regional NAO- like pattern while zonal-eddy coupling may add on top of the wave energy propagation. Later at the quasi-equilibrium nonlinear stage, the atmospheric response emphasizes a wavenumber-5 structure embedded in the westerly jets, associated with transient-eddy feedback upon the Atlantic and Pacific storm-tracks. This AGCM waveguided structure rightly projects on the observational NAO-related circumglobal pattern, providing evidence of its non-annular character in the troposphere. These findings support the view on the importance of the circumglobal waveguide pattern on the development of NAO-related anomalies at hemispheric level. It could help to settle a consensus view of the Arctic Oscillation, which has been elusive so far.
CitationGarcía-Serrano, Javier; Haarsma, Rein J. Non-annular, hemispheric signature of the winter North Atlantic Oscillation. "Climate Dynamics", 26 Juliol 2016.
URIhttp://hdl.handle.net/2117/89348
DOI10.1007/s00382-016-3292-3
ISSN0930-7575
Publisher versionhttp://link.springer.com/article/10.1007/s00382-016-3292-3
Collections
Share: