Development of biomimetic NiTi alloy: influence of thermo-chemical treatment on the physical, mechanical and biological behavior 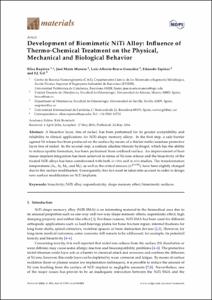 Document typeArticle
Rights accessOpen Access
Abstract
A bioactive layer, free of nickel, has been performed for its greater acceptability and reliability in clinical applications for NiTi shape memory alloys. In the first step, a safe barrier against Ni release has been produced on the surface by means of a thicker rutile/anastase protective layer free of nickel. In the second step, a sodium alkaline titanate hydrogel, which has the ability to induce apatite formation, has been performed from oxidized surface. An improvement of host tissue–implant integration has been achieved in terms of Ni ions release and the bioactivity of the treated NiTi alloys has been corroborated with both in vitro and in vivo studies. The transformation temperatures (As, Af, Ms, and Mf), as well as the critical stresses (sß¿M), have been slightly changed due to this surface modification. Consequently, this fact must be taken into account in order to design new surface modification on NiTi implants.
CitationRupérez de Gracia, E., Manero, J., Bravo, L., Espinar, E., Gil, J. Development of biomimetic NiTi alloy: influence of thermo-chemical treatment on the physical, mechanical and biological behavior. "Materials", Juny 2016, vol. 9, núm. 6, art. 402.
URIhttp://hdl.handle.net/2117/87331
DOI10.3390/ma9060402
ISSN1996-1944
Publisher versionhttp://www.mdpi.com/1996-1944/9/6/402
Collections
Share: