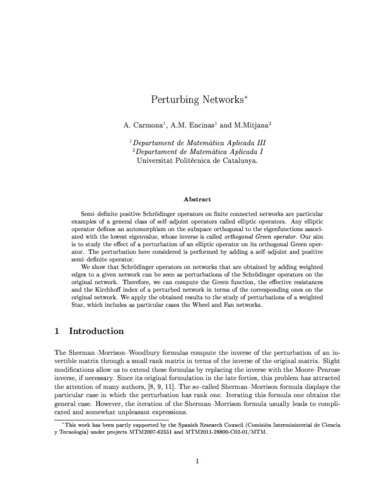 Document typeConference lecture
Rights accessOpen Access
Abstract
Semi-definite positive Schrödinger operators on finite connected networks are particular examples of a general class of self-adjoint operators called elliptic operators. Any elliptic operator defines an automorphism on the subspace orthogonal to the eigenfunctions associated with the lowest eigenvalue, whose inverse is called orthogonal Green operator. Our aim is to study the effect of a perturbation of an elliptic operator on its orthogonal Green operator. The perturbation here considered is performed by adding a self-adjoint and positive semi-definite operator. We show that Schrödinger operators on networks that are obtained by adding weighted edges to a given network can be seen as perturbations of the Schrödinger operators on the original network. Therefore, we can compute the Green function, the effective resistances and the Kirchhoff index of a perturbed network in terms of the corresponding ones on the original network. We apply the obtained results to the study of perturbations of a weighted Star, which includes as particular cases the Wheel and Fan networks.
CitationMitjana, M.; Carmona, A.; Encinas, A. Perturbing networks. A: Latin Ibero-American Spectral Graph Theory Workshop. "LIA-SGT Workshop: Latin Ibero-American Spectral Graph Theory Workshop 2012, September, 24-28 2012, Rio de Janeiro, Brasil". 2012, p. 1-24.
URIhttp://hdl.handle.net/2117/343747
Collections
Share: