Tracking implementation on a collaborative robot 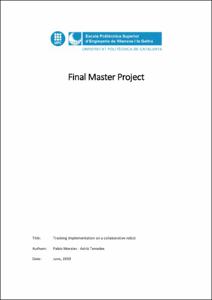 Except where otherwise noted, content on this work is licensed under a Creative Commons license : Attribution 3.0 Spain
Abstract
On the last years, the industry is making changes on the way of doing things, due to the spawning of new technologies. Those changes are so aggressive, that many people are referring to them as the fourth industrial revolution, or Industry 4.0. One of the main focus of this new revolution is the flexibility of the production, through data acquisition. Technologies like IoT or Bluetooth 5.0 allow the interconnectivity of devices, by knowing the user needs the production can be changed to adjust the market. The most flexible machine on the factories are robots, they can change their process with only changing their program. Their flexibility can be improved further if a collaboration between the machine and the factory worker can be achieved. Robots and techniques are being developed to facilitate or fulfil this need for Human-Robot Collaboration. This Project consists of the development of a collaborative conveyor solution using a collaborative robot. The presented solution was implemented on a LBR IIWA. Being this type of robot relatively new to the industry, at the moment of the making of this report, still there is no standard solution for LBR IIWA for conveyor tracking applications. The use of conveyors and robots operating on them, while in motion, is a common application of material handling used on factories with high throughput. This application is done by fast robots such a delta robot that preform applications known as “pick and place”, which are summarized into picking from a moving belt and placing into a container or another moving belt. The main characteristic of this robot, and some others collaborative robots, is the additional sensors allocated in each of its axis, which allows them to gather information of the physical world. Therefore, with the appropriate safety systems and programming, allow them to work simultaneously with a human operator at the same space and time, or to perform complex task of assembly, that rely on the human sense of touch. This kind of robots allows line operators to interact with the robot during the industrial process, which can benefit the production, as this kind of application can mix the benefits of the human production with the reliability of robots. “Pick and place” applications require high speeds, which “collaborative” robots are not capable to reach. The use of this kind of robot with conveyors should be restricted to applications that do not rely on the speed of the robot, but their sensibility such as assembly on the line or inspection, by picking pieces from a non-human friendly belt and give it to the operator.
SubjectsRobots, Industrial, Human-machine systems, Robots industrials, Sistemes persona-màquina
DegreeMÀSTER UNIVERSITARI EN ENGINYERIA DE SISTEMES AUTOMÀTICS I ELECTRÒNICA INDUSTRIAL (Pla 2012)
URIhttp://hdl.handle.net/2117/172074
Collections
Share: