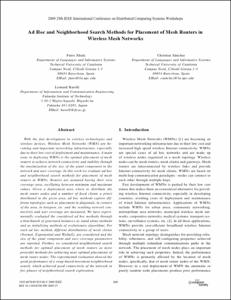 Sánchez Lopez, Christian
Barolli, Leonard
Document typeConference report
Rights accessOpen Access
Abstract
With the fast development in wireless technologies and wireless devices, Wireless Mesh Networks (WMN) are becoming and important networking infrastructure, especially due to their low cost of deployment and maintenance. A main issue in deploying WMNs is the optimal placement of mesh routers to achieve network connectivity and stability through the maximization of the size of the giant component in the network and user coverage. In this work we evaluate ad hoc and neighborhood search methods for placement of mesh routers in WMNs. Routers are assumed having their own coverage area, oscillating between minimum and maximum values. Given a deployment area where to distribute the mesh router nodes and a number of fixed clients a priori distributed in the given area, ad hoc methods explore different topologies such as placement in diagonals, in corners of the area, in hotspots, etc. and the resulting network connectivity and user coverage are measured. We have experimentally evaluated the considered ad hoc methods through a benchmark of generated instances as stand alone methods and as initializing methods of evolutionary algorithms. For each ad hoc method, different distributions of mesh clients (Normal, Exponential and Weibull), are considered and the size of the giant component and user coverage parameters are reported. Further, we considered neighborhood search methods for optimal placement of mesh routers as more powerful methods for achieving near optimal placements of mesh router nodes. The experimental evaluation showed the good performance of a swap-based movement neighborhood search, which achieved good connectivity of the network in few phases of neighborhood search exploration.
CitationXhafa, F.; Sánchez, C.; Barolli, L. Ad hoc and neighborhood search methods for placement of mesh routers in Wireless Mesh Networks. A: International Conference on Distributed Computing Systems. "29th IEEE International Conference on Distributed Computing Systems workshops, 2009: ICDCS workshops'09; 22-26 June 2009, Montreal, Quebec, Canada; proceedings". 2009, p. 400-405.
URIhttp://hdl.handle.net/2117/13289
DOI10.1109/ICDCSW.2009.37
ISBN978-1-4244-4446-5
Publisher versionhttp://ieeexplore.ieee.org/stamp/stamp.jsp?arnumber=05158884
Collections
Share: