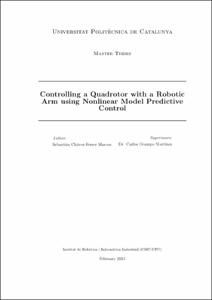 Document typeMaster thesis
Rights accessOpen Access
Abstract
This thesis designs a method to control a quadrotor equipped with a robotic arm. The arm has been developed in Institut de Rob otica i Inform atica Industrial (CSIC-UPC), namely here IRI. During the project, an algorithm has been made as a rst approximation to control a quadrotor that is working with the robotic arm. In order to compensate the perturbations of the arm's dynamic, a NMPC algorithm has been chosen while others have been discarded as it is discussed in the state of the art (PID, Linear Model Predictive Control or LQR). PID and model predictive control have been discarded because is not possible to handle the nonlinearities of the system studied and reach the desired control objectives. Also there are no possibilites to restrict the system using physical constraints. Finally, three scenarios have been simulated and tested to verify the performances and robustness of the designed method. A takeo maneuver, where the quadrotor reaches a speci c altitude. A hover mode where the system should compensate the dynamics of the arm while it is static or it is in movement. Finally, the quadorotor has to move to a speci c point in the space while the arm it is static or in movement. The goal of the controller is to reject the perturbation due the movement of the arm and stabilize the system. This thesis presents the results obtained after simulating the designed controller with the scenarios considered.
SubjectsDrone aircraft -- Automatic control, Predictive control, Nonlinear control theory, Robots -- Design and construction, Avions no tripulats -- Control automàtic, Control predictiu, Control no lineal, Teoria de, Robots -- Disseny i construcció
URIhttp://hdl.handle.net/2099.1/25680
Collections
Share: