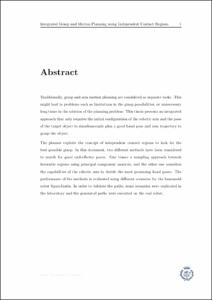 Except where otherwise noted, content on this work is licensed under a Creative Commons license : Attribution-NonCommercial-NoDerivs 3.0 Spain
Abstract
Traditionally, grasp and arm motion planning are considered as separate tasks. This might lead to problems such as limitations in the grasp possibilities, or unnecessary long times in the solution of the planning problem. This thesis presents an integrated approach that only requires the initial con guration of the robotic arm and the pose of the target object to simultaneously plan a good hand pose and arm trajectory to grasp the object. The planner exploits the concept of independent contact regions to look for the best possible grasp. In this document, two di erent methods have been considered to search for good end-e ector poses. One biases a sampling approach towards favorable regions using principal component analysis, and the other one considers the capabilities of the robotic arm to decide the most promising hand poses. The performance of the methods is evaluated using di erent scenarios for the humanoid robot SpaceJustin. In order to validate the paths, some scenarios were replicated in the laboratory and the generated paths were executed on the real robot.
SubjectsManipulators (Mecanism), Robotics, Manipuladors (Mecanismes), Robòtica
ProvenanceAquest document conté originàriament altre material i/o programari no inclòs en aquest lloc web
DegreeENGINYERIA INDUSTRIAL (Pla 1994)
URIhttp://hdl.handle.net/2099.1/25631
Collections
Share: