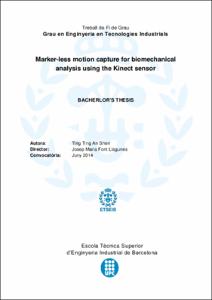 Motion capture systems are gaining more and more importance in different fields of research. In the field of biomechanics, marker-based systems have always been used as an accurate and precise method to capture motion. However, attaching markers on the subject is a time-consuming and laborious method. As a consequence, this problem has given rise to a new concept of motion capture based on marker-less systems. By means of these systems, motion can be recorded without attaching any markers to the skin of the subject and capturing colour-depth data of the subject in movement. The current thesis has researched on marker-less motion capture using the Kinect sensor, and has compared the two motion capture systems, marker-based and marker-less, by analysing the results of several captured motions. In this thesis, two takes have been recorded and only motion of the pelvis and lower limb segments have been analysed. The methodology has consisted of capturing the motions using the marker-based and marker-less systems simultaneously and then processing the data by using specific software. At the end, the angles of hip flexion, hip adduction, knee and ankle obtained through the two systems have been compared. In order to obtain the three-dimensional joint angles using the marker-less system, a new software named iPi Soft has been introduced to process the data from the Kinect sensor. Finally, the results of two systems have been compared and thoroughly discussed, so as to assess the accuracy of the Kinect system.
SubjectsStereoscopic views, Kinect (Programmable controller), Visions estereoscòpiques, Kinect (Controlador programable)
URIhttp://hdl.handle.net/2099.1/24806