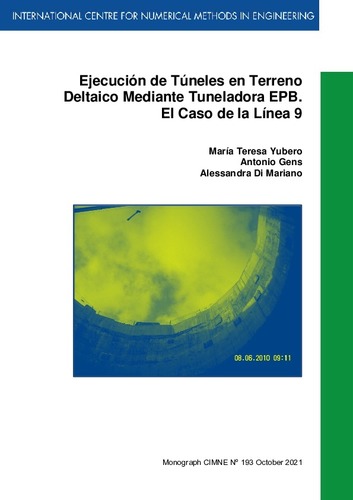 Except where otherwise noted, content on this work is licensed under a Creative Commons license : Attribution-NonCommercial-NoDerivs 3.0 Spain
Abstract
The progressive increment in urban tunneling may generate significant problems. One of the main concerns is the unavoidable ground movements generated; before, during and after the tunneling operations. In this context, the objective of this monograph is the study of the ground movements, both on the surface and at depth, caused by tunnel excavations using Tunnel Boring Machines (TBMs). Within the scope of TBMs, we can distinguish between tunneling machines for hard ground and shield machines for excavation in low-strength soils. The shield machines and, specifically, the Earth Pressure Balance shields, are based on the principle of equilibrium between the tunnel face and the excavated soil in the front chamber. The presence of the excavated ground in the chamber avoids from instabilities, especially when excavating soils with low cohesion under water. An example of EPB tunneling is the case of the Line 9 (under construction) of the Barcelona Metro. Once the Line will be finished, it would be one of the longest lines in Europe with a total length of 47.8 Km constructed for the most part in an urban setting. This Line 9 tunnel crosses different types of soils. This monograph specifically refers to the excavation of Line 9 between Terminal 1 at the Prat airport and the industrial area called “Parc Logistic”. This 14 km- long section of the route is called Section 1 in the construction project of the Line 9 and corresponds to the stretch between the stations of Terminal T1 and Parc Logístic. The studied area is located in the Llobregat river delta and it is made up of quaternary deltaic deposits completely excavated in soft deltaic deposits of mixed soft clays that constitute a quite uniform layer. Tunneling is performed by two EPB machines of 9.4 m diameter. An important monitoring system was installed not only in Section 1 but throughout the whole line as well. The system was devoted to the measurement of the magnitude and distribution of ground movements before, during and after the passing of the EPB. The information on the horizontal and vertical movements, at the surface and at depth, is analyzed and compared with empirical and semi-empirical methods available in the literature. Both the cross-section and the longitudinal distributions are considered. For the case of surface settlement troughs, the comparisons are made at two times related to the excavation process. The first one, called short-term, considers the movements until the tunnel lining has been installed. The second one, called long-term, considers the movements until the consolidation of the ground has finished. The settlement distributions have been represented by an inverted Gaussian distribution curve that has been adjusted using different methods. In addition, the observed settlement troughs have been approximated by alternative empirical expressions and by equations based on analytical solutions. For the case of the vertical and horizontal movement distributions at depth, the same short-term and the long-term points mentioned above have been considered. Movements at depth have been examined in ten cross-sections (also called transverse sections) along the line, called Control Sections. In the same way, the data recorded by vibrating wire piezometers and Casagrande open piezometers have been analyzed and the variation of the piezometric has been plotted. The analysis of all the data collected has allowed the comparison between the results of Line 9 Section 1 with forty-five cases of tunnels excavated not only in similar soft soils, but also in sandy soils and in stiff clays. Finally, two-dimensional simulation of the excavation has been carried out using the Plaxis finite element program, using a constitutive model that includes small deformation behavior, the Small Strain Hardening Soil. The analysis has been able to reproduce satisfactorily the observed movements both in the short and long term, establishing a useful record for other EPB tunneling projects in similar soft soils.
CitationYubero, M.T.; Gens, A.; Di Mariano, A. Ejecución de túneles en terreno deltaico mediante tuneladora EPB. El caso de la línea 9. Barcelona: International Centre for Numerical Methods in Engineering (CIMNE), 2021.
URIhttp://hdl.handle.net/2117/363541
Publisher versionhttps://books.cimne.com/product/ejecucion-de-tuneles-en-terreno-deltaico-mediante-tuneladora-epb-el-caso-de-la-linea-9/
Collections
Share: