Built in dampers for stayed cables in bridges via SMA. The SMARTeR-ESF project: a mesoscopic and macroscopic experimental analysis with numerical simulations 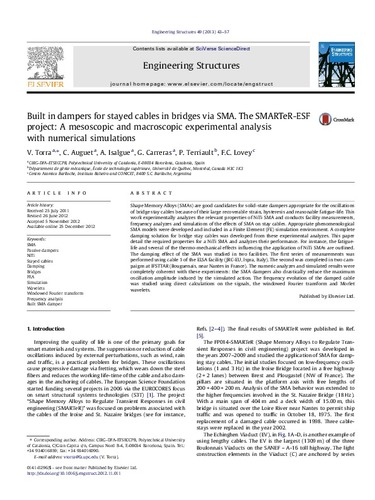 Except where otherwise noted, content on this work is licensed under a Creative Commons license : Attribution-NonCommercial-NoDerivs 3.0 Spain
Abstract
Shape Memory Alloys (SMAs) are good candidates for solid-state dampers appropriate for the oscillations of bridge stay cables because of their large recoverable strain, hysteresis and reasonable fatigue-life. This work experimentally analyzes the relevant properties of NiTi SMA and conducts facility measurements, frequency analyzes and simulations of the effects of SMA on stay cables. Appropriate phenomenological SMA models were developed and included in a Finite Element (FE) simulation environment. A complete damping solution for bridge stay cables was developed from these experimental analyzes. This paper detail the required properties for a NiTi SMA and analyzes their performance. For instance, the fatigue-life and several of the thermo-mechanical effects influencing the application of NiTi SMAs are outlined. The damping effect of the SMA was studied in two facilities. The first series of measurements was performed using cable 1 of the ELSA facility (JRC-EU, Ispra, Italy). The second was completed in two campaigns at IFSTTAR (Bouguenais, near Nantes in France). The numeric analyzes and simulated results were completely coherent with these experiments: the SMA dampers also drastically reduce the maximum oscillation amplitude induced by the simulated action. The frequency evolution of the damped cable was studied using direct calculations on the signals, the windowed Fourier transform and Morlet wavelets.
CitationTorra, V. [et al.]. Built in dampers for stayed cables in bridges via SMA. The SMARTeR-ESF project: a mesoscopic and macroscopic experimental analysis with numerical simulations. "Engineering structures", Abril 2013, vol. 49, p. 43-57.
URIhttp://hdl.handle.net/2117/335337
DOI10.1016/j.engstruct.2012.11.011
ISSN0141-0296
Publisher versionhttps://www.sciencedirect.com/science/article/pii/S0141029612005779
Collections
Share: