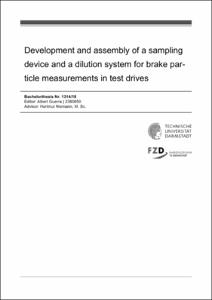 CovenanteeTechnische Universität Darmstadt
Document typeBachelor thesis
Rights accessOpen Access
Abstract
Due to the reduction of exhaust emissions in the last years, the percentage of particulate matter emitted by non-exhaust sources has increased. Brakes play an important role emitting more than half of this type of emissions.1 The FZD department is carrying a research in order to reach a better understanding of the behavior of brake particle emissions and reduce them. For this purpose, real-drive tests have been conducted in previous works and development of new setups to collect particles must be achieved. The aim of this Bachelor thesis is to develop concepts for measurements in test drives. It is necessary to minimize losses of particles and take representative samples of particulate matter. With the intention of accomplishing these necessities, a study of aerosol losses has been done. The objective of this study is to optimize aerosol transport through sampling tubes. Two concepts, a full brake enclosure device and a rim shell device, have been developed and their basic operation system is explained. In the first concept, a full sealed shell around the brake is used to minimize particles losses. This could be think to act in a similar way as the sealed chamber used in dynamometer tests and the results should be similar. For that reason, this concept has been rejected. The second concept tries to reach a realistic behavior of particles taking realistic flow conditions due to the airstream entering to the collecting shell through an air scoop and the interaction of particles with the inner surfaces of the rim. Due to the turbulent regime generated and the limited time to manufacture and assembly the setup, its construction has been discarded. In the study of transport losses different mechanisms have been studied. These mechanisms are diffusional deposition, gravitational settling deposition in horizontal tubes and inclined tubes and inertial deposition in bends. For each one its efficiency has been calculated for a size range of particles and tube lengths. Furthermore, efficiency has been calculated for a particle transport system similar to one that could be used in a test car. With this study, a general approach to the magnitude of transport efficiency has been reached. It has been possible to conclude that losses are much higher for large particles than for small particles. Finally, some considerations to optimize the transport of particles have been presented.
SubjectsAutomobiles -- Brakes, Aerosols, Automobiles -- Pollution control devices, Automòbils -- Frens, Aerosols, Automòbils -- Contaminació
DegreeGRAU EN ENGINYERIA MECÀNICA (Pla 2009)
URIhttp://hdl.handle.net/2117/173079
Collections
Share: