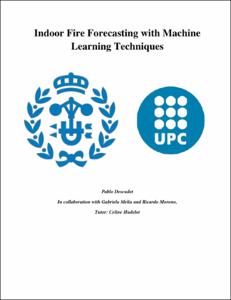 This document serves as a description of the development of our project up to the JALON 3 submission date: 31st May 2018. A history of the project and the obtained results are presented. The document consists of three main parts, excluding this introduction. In the first one, a description of the work process is done, including what each task consisted of and the main concepts learned. The next part is dedicated to the explanation of the difficulties that were faced during the project. Finally, conclusions and prospects for the future are presented in the last section of this document. The final goal of this project was to develop a machine learning algorithm that could predict the behavior of a precise fire in an atrium. During the investigation of previous works of this field, it was found that the topic had not been explored much and the application of machine learning techniques had been barely considered. This, and the fact that machine learning has worked very well for cases similar to the prediction of indoor fires, made this project more interesting. The project begun by the learning of machine learning techniques and the study of the state of the art, was followed by a long period of data analysis and ended with the design of the codes. During this process, there were times where the objectives were unclear and we failed to see the use of what we were doing, mainly during the data analysis, which was completely new to us. However, new solutions were coming up continuously, ways of improving the working methods and even achieving things which had been considered impossible at the start. In the end, the results are better than expected and most of the work needed to propose an algorithm which can predict every kind of fire in the atrium has been done.
SubjectsMachine learning, Algorithms, Aprenentatge automàtic, Algorismes
URIhttp://hdl.handle.net/2117/167787