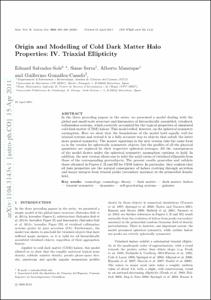 In the three preceding papers in the series, we presented a model dealing with the global and small-scale structure and kinematics of hierarchically assembled, virialised, collisionless systems, which correctly accounted for the typical properties of simulated cold darkmatter (CDM) haloes. This model relied, however, on the spherical symmetry assumption. Here we show that the foundations of the model hold equally well for triaxial systems and extend it in a fully accurate way to objects that satisfy the latter more general symmetry. The master equations in the new version take the same form as in the version for spherically symmetric objects, but the profiles of all the physical quantities are replaced by their respective spherical averages. All the consequences of the model drawn under the spherical symmetry assumption continue to hold. In addition, the new version allows one to infer the axial ratios of virialised ellipsoids from those of the corresponding protoobjects. The present results generalise and validate those obtained in Papers I, II and III for CDM haloes. In particular, they confirm that all halo properties are the natural consequence of haloes evolving through accretion and major mergers from triaxial peaks (secondary maxima) in the primordial density field.
CitationSalvador-Solé, E. [et al.]. "Origin and modelling of cold dark matter halo properties: IV. Triaxial ellipticity". 2011.
URIhttp://hdl.handle.net/2117/14392
URL other repositoryhttp://es.arxiv.org/pdf/1104.3143