High-radix division and square-root with speculation 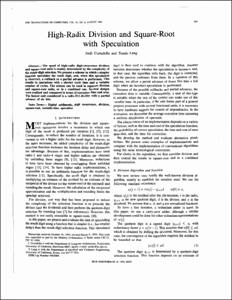 Lang Korpel, Thomas
Document typeArticle
PublisherInstitute of Electrical and Electronics Engineers (IEEE)
Rights accessOpen Access
Abstract
The speed of high-radix digit-recurrence dividers and square-root units is mainly determined by the complexity of the result-digit selection. We present a scheme in which a simpler function speculates the result digit, and, when this speculation is incorrect, a rollback or a partial advance is performed. This results in operations with a shorter cycle time and a variable number of cycles. The scheme can be used in separate division and square-root units, or in a combined one. Several designs were realized and compared in terms of execution time and area. The fastest unit considered is a radix-512 divider with a partial advance of six bits.
CitationCortadella, J., Lang, T. High-radix division and square-root with speculation. "IEEE transactions on computers", Agost 1994, vol. 43, núm. 8, p. 919-931.
URIhttp://hdl.handle.net/2117/124902
DOI10.1109/12.295854
ISSN0018-9340
Publisher versionhttps://ieeexplore.ieee.org/document/295854
Collections
Share: