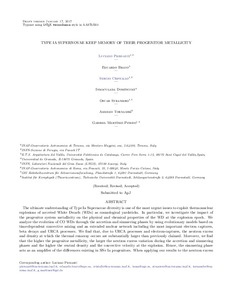 The ultimate understanding of SNe Ia diversity is one of the most urgent issues to exploit thermonuclear explosions of accreted White Dwarfs (WDs) as cosmological yardsticks. In particular, we investigate the impact of the progenitor system metallicity on the physical and chemical properties of the WD at the explosion epoch. We analyze the evolution of CO WDs through the accretion and simmering phases by using evolutionary models based on time-dependent convective mixing and an extended nuclear network including the most important electron captures, beta decays, and URCA processes. We find that, due to URCA processes and electron-captures, the neutron excess and density at which the thermal runaway occurs are substantially larger than previously claimed. Moreover, we find that the higher the progenitor metallicity, the larger the neutron excess variation during the accretion and simmering phases and the higher the central density and the convective velocity at the explosion. Hence, the simmering phase acts as an amplifier of the differences existing in SNe Ia progenitors. When applying our results to the neutron excess estimated for the Tycho and Kepler young supernova remnants, we derive that the metallicity of the progenitors should be in the range Z = 0.030 – 0.032 , close to the average metallicity value of the thin disk of the Milky Way. As the amount of 56 Ni produced in the explosion depends on the neutron excess and central density at the thermal runaway, our results suggest that the light curve properties depend on the progenitor metallicity.
CitationPiersanti, L., Bravo, E., Cristallo, S., Domínguez, I., Straniero, O., Tornambé, A., Martínez, G. SNe Ia keep memory of their progenitor metallicity. "The astrophysical journal letters", 9 Febrer 2017, vol. 836, núm. L9, p. 1-6.
URIhttp://hdl.handle.net/2117/112692
DOI10.3847/2041-8213/aa5c7e
ISSN2041-8205
Publisher versionhttp://iopscience.iop.org/article/10.3847/2041-8213/aa5c7e/meta;jsessionid=7A070684D0548FE0F5A153D5EE2F8061.c2.iopscience.cld.iop.org