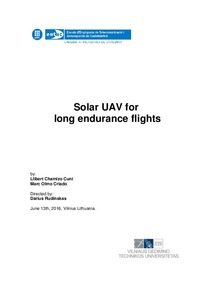 The project have been done during the four months stay in Lithuania by Marc Olmo and LLibert Chamizo. The aim of the project was to obtain an Unmanned Aerial Vehicle powered by solar energy that was able to flight for as long as possible it within the limitations which are the budget, the time and the technological limitations. During the limited time, the team have been working in all the necessary phases to build a real scale and fully functional Solar UAV. This phases were the following; Theoretical Calculations, Design, Simulation, Building, Tests of the Airframe, Solar Energy Circuit Design and Building 2nd phase tests and Conclusion Obtaining. Through all the process several technical and engineering decisions have been made leading the team to obtain a fully functional 4,4m wingspan fixed wing UAV with a TOW of 5,5 Kg which is perfectly pilotable The final achievements have been a UAV capable of long endurance flight within daytime. The model achieved was able to maintain level, climb and turn perfectly using just the power gathered by the solar cells in its wing. During the development of the project the possibility of the multiday flight have been discussed leading to the conclusion that it's viable but not within the frame of this project. There have been done several tests under actual mission parameters loading the plane with the weight it would be carried during the missions that are most likely solar uav related such as mapping or surveillance. The final result have been correct and lead to an optimistic opinion about the whole Solar UAV paradigm and about the prototype modification and improvement in the near future to achieve even better results (which have been overviewed and planned in the actual report). A fatal error drove the airplane to a nosedive fall with disastrous consequences, the whole project feels and success though it's undoubtable.
SubjectsEndurance flights, Energia solar fotovoltaica -- Aplicacions
URIhttp://hdl.handle.net/2117/107251