Implementation and verification of a lunar mission subsystems 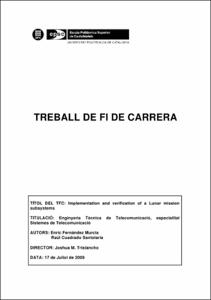 Document typeMaster thesis (pre-Bologna period)
Rights accessOpen Access
Abstract
This final project is to implement and verify some of the subsystems that make up the Lunar mission designed by the team FREDNET Team (www.teamfrednet.org) for the Google Lunar X Prize, a competition to land on the moon in 20XX, collaborating on the design of some components. This project is developed in collaboration with other researchers of many nationalities and therefore needs to be part of the group in a real project focused on the use of open source software and the Internet community. Especially important is the development of, with our collaboration, one of the possible Rovers (vehicle that will move through the lunar surface) under the name of Pico-Rover. Highlights its particular design, emulating a small ball. We can develop a new concept of proposing Rovers miniaturization and cost reduction by applying concepts of physics but unconventional or usual (by now, all are Rovers used have low manoeuvrability and very high cost). Especially, we have studied and developed a short-range communication to allow the sending and receiving data to the Rover as images, video, telemetry, etc, and accelerometers to achieve radio-control and autonomous Rover control. Furthermore, we proceed to the study, construction and testing of communications boards CAN-Do for possible use in the Lunar Bus and / or Lunar Lander, which will commented in detail later. It has also initiated an investigation to give the Rover a system for detecting obstacles under the name of PicoSAR (micro-RADAR). It has also studied possible characteristics of a satellite link between the Rover and the Lunar Lander, which allows you to be in contact with the Rover. It is a very ambitious project, but which also allows us to participate in an innovative and very interesting format that we can already say that we are an important part in the team.
SubjectsArtificial satellites - Moon, Satèl·lits artificials
DegreeENGINYERIA TÈCNICA DE TELECOMUNICACIÓ, ESPECIALITAT EN SISTEMES DE TELECOMUNICACIÓ (Pla 2000)
URIhttp://hdl.handle.net/2099.1/8292
Collections
Share: