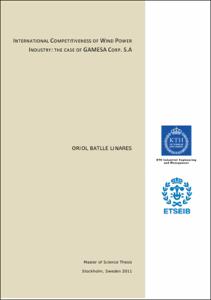 The modern lifestyle is highly dependent on the electricity consumption, which demand is expected to continue growing worldwide, especially in those developing areas where the whole economy is transforming. Until now, most of this electricity demand had been supplied through the combustion of fossil fuels or nuclear power. But the utilization of these energy sources to power the human activity is unsustainable because of limitless of the resources and the hazardous emissions and wastes that they generate. That is why since few decades ago the wind power became one of the best-positioned renewable energy in terms of costs effectiveness as a viable alternative to the energetic model based on pollutant fossil fuels. This technology was firstly developed and implemented on those countries with a traditional environmental conscientiousness, but as the global warming issue increased new countries were interested to use wind power as a clean and sustainable energy source. The growing wind power demand of developing countries has changed in few years the entire industry, because new local manufacturers have appeared thanks to the government renewable policy, which main objective is to develop a strong domestic wind power industry capable of lead the world transformation to a clean energy model. The thesis defines the most commons renewable energy policies, and focus in the policy used in China with the aim to analyze if it is promoting or damaging the expansion of wind power use because of the priority is protect its own domestic wind power industry from international firms. The conclusions are that those protectionist policies are useful in the early stage of the industry development but the government must know the exact moment in which these subsidies and supporting mechanisms become counterproductive. If those are used during a prolonged period, then companies become dependent on subsidies and don’t act like in free markets where the innovation is the key to gain and maintain sustainable competitive advantage.
SubjectsWind power, Energia eòlica
ProvenanceAquest document conté originàriament altre material i/o programari no inclòs en aquest lloc web