On the positional and orientational order of water and methanol around indole: a study on the microscopic origin of solubility 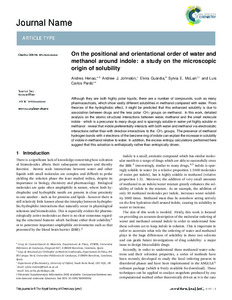 Document typeArticle
Rights accessOpen Access
Abstract
Although they are both highly polar liquids, there are a number of compounds, such as many pharmaceuticals, which show vastly different solubilities in methanol compared with water. From theories of the hydrophobic effect, it might be predicted that this enhanced solubility is due to association between drugs and the less polar -CH3 groups on methanol. In this work, detailed analysis on the atomic structural interactions between water, methanol and the small molecule indole – which is a precursor to many drugs and is sparingly soluble in water yet highly soluble in methanol – reveal that indole preferentially interacts with both water and methanol via electrostatic interactions rather than with direction interactions to the –CH3 groups. The presence of methanol hydrogen bonds with p electrons of the benzene ring of indole can explain the increase in solubility of indole in methanol relative to water. In addition, the excess entropy calculations performed here suggest that this solvation is enthalpically rather than entropically driven.
CitationHenao, A., Johnston, A., Guardia, E., McLain, S., Pardo, L. On the positional and orientational order of water and methanol around indole: a study on the microscopic origin of solubility. "Physical chemistry chemical physics", 7 Setembre 2016, vol. 18, núm. 33, p. 23006-23016.
URIhttp://hdl.handle.net/2117/98780
DOI10.1039/c6cp04183c
ISSN1463-9076
Publisher versionhttp://pubs.rsc.org/en/Content/ArticleLanding/2016/CP/C6CP04183C#!divAbstract
Collections
Share: