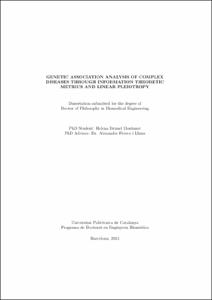 The main goal of this thesis was to help in the identification of genetic variants that are responsible for complex traits, combining both linear and nonlinear approaches. First, two one-locus approaches were proposed. The first one defined and characterized a novel nonlinear test of genetic association, based on the mutual information measure. This test takes into account the genetic structure of the population. It was applied to the GAW17 dataset and compared to the standard linear test of association. Since the solution of the GAW17 simulation model was known, this study served to characterize the performance of the proposed nonlinear methods in comparison to the linear one. The proposed nonlinear test was able to recover the results obtained with linear methods but also detected an additional SNP in a gene related with the phenotype. In addition, the performance of both tests in terms of their accuracy in classification (AUC) was similar. In contrast, the second approach was an exploratory study on the relationship between SNP variability among species and SNP association with disease, at different genetic regions. Two sets of SNPs were compared, one containing deleterious SNPs and the other defined by neutral SNPs. Both sets were stratified depending on the region where the polymorphisms were located, a feature that may have influenced their conservation across species. It was observed that, for most functional regions, SNPs associated to diseases tend to be significantly less variable across species than neutral SNPs. Second, a novel nonlinear methodology for multiloci genetic association was proposed with the goal of detecting association between combinations of SNPs and a phenotype. The proposed method was based on the mutual information of statistical significance, called MISS. This approach was compared with MLR, the standard linear method used for genetic association based on multiple linear regressions. Both were applied as a relevance criterion of a new multi-solution floating feature selection algorithm (MSSFFS), proposed in the context of multi-loci genetic association for complex diseases. Both were also compared with MECPM, an algorithm for searching predictive multi-loci interactions with a criterion of maximum entropy. The three methods were tested on the SNPs of the F7 gene, and the FVII levels in blood, with the data from the GAIT project. The proposed nonlinear method (MISS) improved the results of traditional genetic association methods, detecting new SNP-SNP interactions. Most of the obtained sets of SNPs were in concordance with the functional results found in the literature where the obtained SNPs have been described as functional elements correlated with the phenotype. Third, a linear methodological framework for the simultaneous study of several phenotypes was proposed. The methodology consisted in building new phenotypic variables, named metaphenotypes, that capture the joint activity of sets of phenotypes involved in a metabolic pathway. These new variables were used in further association tests with the aim of identifying genetic elements related with the underlying biological process as a whole. As a practical implementation, the methodology was applied to the GAIT project dataset with the aim of identifying genetic markers that could be related to the coagulation process as a whole and thus to thrombosis. Three mathematical models were used for the definition of metaphenotypes, corresponding to one PCA and two ICA models. Using this novel approach, already known associations were retrieved but also new candidates were proposed as regulatory genes with a global effect on the coagulation pathway as a whole.
CitationBrunel Montaner, H. "Genetic association analysis of complex diseases through information theoretic metrics and linear pleiotropy". Tesi doctoral, UPC, Departament d'Enginyeria de Sistemes, Automàtica i Informàtica Industrial, 2013. Available at: <http://hdl.handle.net/2117/95207>
URIhttp://hdl.handle.net/2117/95207
DLB 13558-2014