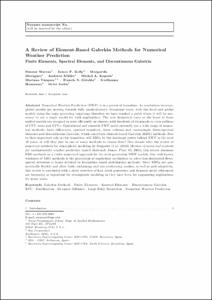 Jorba, Oriol
Document typeArticle
PublisherSpringer
Rights accessOpen Access
All rights reserved. This work is protected by the corresponding intellectual and industrial property rights. Without prejudice to any existing legal exemptions, reproduction, distribution, public communication or transformation of this work are prohibited without permission of the copyright holder
Abstract
Numerical weather prediction (NWP) is in a period of transition. As resolutions increase, global models are moving towards fully nonhydrostatic dynamical cores, with the local and global models using the same governing equations; therefore we have reached a point where it will be necessary to use a single model for both applications. The new dynamical cores at the heart of these unified models are designed to scale efficiently on clusters with hundreds of thousands or even millions of CPU cores and GPUs. Operational and research NWP codes currently use a wide range of numerical methods: finite differences, spectral transform, finite volumes and, increasingly, finite/spectral elements and discontinuous Galerkin, which constitute element-based Galerkin (EBG) methods.Due to their important role in this transition, will EBGs be the dominant power behind NWP in the next 10 years, or will they just be one of many methods to choose from? One decade after the review of numerical methods for atmospheric modeling by Steppeler et al. (Meteorol Atmos Phys 82:287–301, 2003), this review discusses EBG methods as a viable numerical approach for the next-generation NWP models. One well-known weakness of EBG methods is the generation of unphysical oscillations in advection-dominated flows; special attention is hence devoted to dissipation-based stabilization methods. Since EBGs are geometrically flexible and allow both conforming and non-conforming meshes, as well as grid adaptivity, this review is concluded with a short overview of how mesh generation and dynamic mesh refinement are becoming as important for atmospheric modeling as they have been for engineering applications for many years.
CitationMarras, Simone [et al.]. A Review of Element-Based Galerkin Methods for Numerical Weather Prediction: Finite Elements, Spectral Elements, and Discontinuous Galerkin. "Archives of Computational Methods in Engineering", 19 Maig 2015.
URIhttp://hdl.handle.net/2117/85001
DOI10.1007/s11831-015-9152-1
ISSN1134-3060
Publisher versionhttp://link.springer.com/article/10.1007%2Fs11831-015-9152-1
Collections
Share: