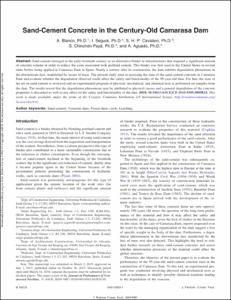 Sand-cement emerged in the early twentieth century as an alternative binder in infrastructures that required a significant amount of concrete volume in order to reduce the costs associated with portland cement. This binder was first used in the United States in several dams before being applied in Camarasa Dam in Spain. Nearly a century after its construction, the dam exhibits degradation phenomena in the downstream face, manifested by losses of mass. The present study aims at assessing the state of the sand-cement concrete in Camarasa Dam and evaluate whether the degradation observed could affect the safety and functionality of the 95-year-old dam. For that, the state of the art on sand-cement is reviewed and an experimental program of physical, mechanical, and chemical tests is performed on samples from the dam. The results reveal that the degradation phenomena may be attributed to physical causes and a general degradation of the concrete properties is discarded as well as any effect on the safety and functionality of the dam.
CitationBlanco, A., Segura, I., Pialarissi Cavalaro, S.H., Chinchón-Payá, S., Aguado, A. Sand-cement concrete in the century-old Camarasa dam. "Journal of performance of constructed facilities", Agost 2016, vol. 30, núm. 4, p. 04015083-1-04015083-10.
URIhttp://hdl.handle.net/2117/84185
DOI10.1061/(ASCE)CF.1943-5509.0000823
ISSN0887-3828
Publisher versionhttp://ascelibrary.org/doi/abs/10.1061/%28ASCE%29CF.1943-5509.0000823