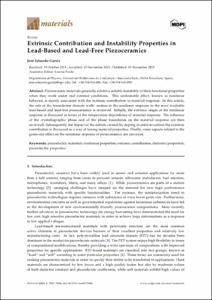 Document typeArticle
Rights accessOpen Access
Abstract
Piezoceramic materials generally exhibit a notable instability of their functional properties when they work under real external conditions. This undesirable effect, known as nonlinear behavior, is mostly associated with the extrinsic contribution to material response. In this article, the role of the ferroelectric domain walls' motion in the nonlinear response in the most workable lead-based and lead-free piezoceramics is reviewed. Initially, the extrinsic origin of the nonlinear response is discussed in terms of the temperature dependence of material response. The influence of the crystallographic phase and of the phase boundaries on the material response are then reviewed. Subsequently, the impact of the defects created by doping in order to control the extrinsic contribution is discussed as a way of tuning material properties. Finally, some aspects related to the grain-size effect on the nonlinear response of piezoceramics are surveyed.
CitationGarcia, J. E. Extrinsic contribution and instability properties in lead-based and lead-free piezoceramics. "Materials", 01 Novembre 2015, vol. 8, núm. 11, p. 7821-7836.
URIhttp://hdl.handle.net/2117/83058
DOI10.3390/ma8115426
ISSN1996-1944
Publisher versionhttp://www.mdpi.com/1996-1944/8/11/5426
Collections
Share: