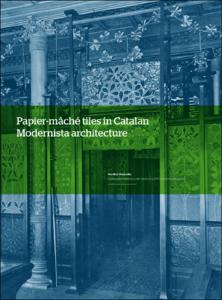 Except where otherwise noted, content on this work is licensed under a Creative Commons license : Attribution-NonCommercial-NoDerivs 3.0 Spain
Abstract
This paper presents one of the most unusual techniques identified in the study of Catalan Modernista architecture: the cladding of walls and ceilings with papier-mâché tiles produced by the Hermenegild Miralles firm. These tiles are similar in appearance to Valencian ceramic tiles, from which they took their designs and surface finishes. The company’s catalogue included a full range of finishes based on contemporary experiments with glazed and enamelled ceramics, such as golden hues, reliefs and incisions. The product catalogue claimed that the papier-mâché tiles were patented, so the technique was closely linked to the firm that marketed it. As far as we know, the tiles were on the market for a rather short time: the catalogue which we have discovered dates from 1894 and the latest examples of the tiles’ use are from 1905. We have found them in works by Antoni Gaudí and Josep Puig i Cadafalch, among others. Because of the importance of the buildings in which these tiles were used and the architects who designed them, we consider that this was not a one-off invention but rather one that, for a certain period of time, offered rich formal possibilities and was simple to install. The new product met a demand for sensory expression and attractive cladding materials. It was inexpensive, lightweight and easily mouldable, so it allowed daring and highly expressive solutions that were affordable for more people
CitationRossello, M. Papier-mâché tiles in Catalan Modernista architecture. A: "Art Nouveau & écology. Melanges". 2015, p. 286-291.
URIhttp://hdl.handle.net/2117/79353
Collections
Share: