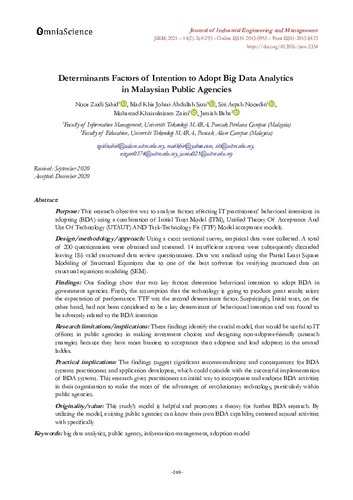 Except where otherwise noted, content on this work is licensed under a Creative Commons license : Attribution-NonCommercial 4.0 International
Abstract
Purpose: This research objective was to analyze factors affecting IT practitioners’ behavioral intentions in adopting (BDA) using a combination of Initial Trust Model (ITM), Unified Theory Of Acceptance And Use Of Technology (UTAUT) AND Task-Technology Fit (TTF) Model acceptance models. Design/methodology/approach: Using a cross sectional survey, empirical data were collected. A total of 200 questionnaires were obtained and screened. 14 insufficient answers were subsequently discarded leaving 186 valid structured data review questionnaires. Data was analizad using the Partial Least Square Modeling of Structural Equations due to one of the best software for verifying structured data on structural equations modeling (SEM). Findings: Our findings show that two key factors determine behavioral intention to adopt BDA in government agencies. Firstly, the assumption that the technology is going to produce great results raises the expectation of performance. TTF was the second determinant factor. Surprisingly, Initial trust, on the other hand, had not been considered to be a key determinant of behavioural intention and was found to be adversely related to the BDA intention. Research limitations/implications: These findings identify the crucial model, that would be useful to IT officers in public agencies in making investment choices and designing non-adopter-friendly outreach strategies because they have more barriers to acceptance than adopters and lead adopters in the reward ladder. Practical implications: The findings suggest significant recommendations and consequences for BDA systems practitioners and application developers, which could coincide with the successful implementation of BDA systems. This research gives practitioners an initial way to incorporate and endorse BDA activities in their organization to make the most of the advantages of revolutionary technology, particularly within public agencies. Originality/value: This study's model is helpful and promotes a theory for further BDA research. By utilizing the model, existing public agencies can know their own BDA capability, centered around activities with specifically
Location
1: Sukang, Brunei
CitationSahid, N.Z. [et al.]. Determinants factors of intention to adopt big data analytics in malaysian public agencies. "Journal of Industrial Engineering and Management", Abril 2021, vol. 14, núm. 2, p. 269-293.
URIhttp://hdl.handle.net/2117/345360
DOI10.3926/jiem.3334
DLB-28744-2008
ISSN2013-0953
Collections
Share: