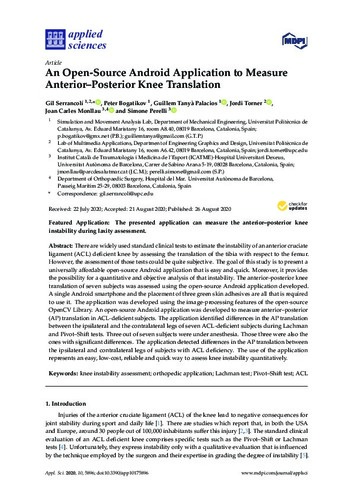 Monllau, Joan Carles
Perelli, Simone
Document typeArticle
PublisherMultidisciplinary Digital Publishing Institute
Rights accessOpen Access
Abstract
There are widely used standard clinical tests to estimate the instability of an anterior cruciate ligament (ACL) deficient knee by assessing the translation of the tibia with respect to the femur. However, the assessment of those tests could be quite subjective. The goal of this study is to present a universally affordable open-source Android application that is easy and quick. Moreover, it provides the possibility for a quantitative and objective analysis of that instability. The anterior–posterior knee translation of seven subjects was assessed using the open-source Android application developed. A single Android smartphone and the placement of three green skin adhesives are all that is required to use it. The application was developed using the image-processing features of the open-source OpenCV Library. An open-source Android application was developed to measure anterior–posterior (AP) translation in ACL-deficient subjects. The application identified differences in the AP translation between the ipsilateral and the contralateral legs of seven ACL-deficient subjects during Lachman and Pivot–Shift tests. Three out of seven subjects were under anesthesia. Those three were also the ones with significant differences. The application detected differences in the AP translation between the ipsilateral and contralateral legs of subjects with ACL deficiency. The use of the application represents an easy, low-cost, reliable and quick way to assess knee instability quantitatively.
CitationSerrancoli, G. [et al.]. An open-source android application to measure anterior–posterior knee translation. "Applied sciences", 26 Agost 2020, vol. 10, núm. 17, p. 5896:1-5896:9.
URIhttp://hdl.handle.net/2117/328671
DOI10.3390/app10175896
ISSN2076-3417
Publisher versionhttps://www.mdpi.com/2076-3417/10/17/5896
Collections
Share: