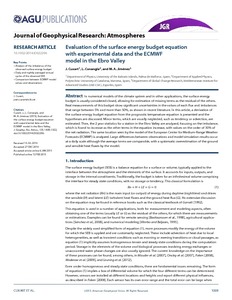 Jiménez Cortés, Maria Antònia
Document typeArticle
Rights accessOpen Access
Abstract
In numerical models of the climate system and in other applications, the surface energy budget is usually considered closed, allowing for estimation of missing terms as the residual of the others. Real measurements of this budget show signi_cant uncertainties in the values of each ux and imbalances that range between 5% and more than 50%, as shown in recent literature. In this article, a derivation of the surface energy budget equation from the prognostic temperature equation is presented and the hypotheses are discussed. Minor terms, which are usually neglected, such as tendency or advection, are estimated. Then, the two-year statistics for a station in the Ebro Valley are analyzed, focusing on the imbalance, which is found to increase as the other terms in the equation increase, with values on the order of 30% of the net radiation. The same location seen by the model of the European Center for Medium-Range Weather Forecast (ECMWF) is analyzed. Large di_erences between observations and model simulation results occur at a daily scale although the average terms are comparable, with a systematic overestimation of the ground and sensible heat uxes by the model.
Location
1: 25111 Raïmat, Lleida, Espanya
CitationCuxart, J.; Conangla, L.; Jiménez , M. Evaluation of the surface energy budget equation with experimental data and the ECMWF model in the Ebro Valley. "Journal of geophysical research: atmospheres", Febrer 2015, vol. 120, núm. 3, p. 1008-1022.
URIhttp://hdl.handle.net/2117/27004
DOI10.1002/2014JD022296
ISSN2169-8996
Publisher versionhttp://onlinelibrary.wiley.com/doi/10.1002/2014JD022296/full
Collections
Share: