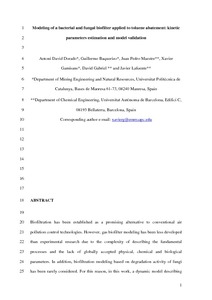 Biofiltration has been established as a promising alternative to conventional air pollution control technologies. However, gas biofilters modeling has been less developed than experimental research due to the complexity of describing the fundamental processes and the lack of globally accepted physical, chemical and biological parameters. In addition, biofiltration modeling based on degradation activity of fungi has been rarely considered. For this reason, in thiswork, a dynamic model describing toluene abatement by a bacterial and fungal biofilter is developed, calibrated and validated. The mathematical model is based on detailed mass balances which include the main processes involved in the system: convection, absorption, diffusion and biodegradation. The model was calibrated and validated using experimental data obtained from two equal lab-scale biofilters packed with coconut fiber and pine leaves, respectively. Both reactors were operated under similar conditions during 100 days at an empty bed residence time of 60 s and an average inlet load of 77 g toluenem−3 h−1. Biofilters were initially inoculated with a bacterial consortium, even though reactors were mostly colonized by fungi after 60 days of operation according to microscopic observation and reactors pH. Removal efficiency increased notably from 20% for the bacterial period to 80% for the fully developed fungal biofilters. Since kinetic parameters are strongly dependent on the biological population, semi-saturation constants for toluene and maximum growth rates were determined for bacterial and fungal operation periods. Kinetic parameters were fitted by means of an optimization routine using either outlet concentrations or removal efficiency data from the coconut fiber biofilter. A novel procedure in gas biofilters modeling was considered for checking the model calibration, by the assessment of the parameters confidence interval based on the Fisher Information Matrix (FIM). Kinetic parameters estimated in the coconut fiber reactor were validated in the pine leaves biofilter for bacterial and fungal operation. Adequate model fitting to the experimental outlet gas concentration for both bacterial and fungal operation periods was verified by using a standard statistical test.
CitaciónDorado, A.D. [et al.]. Modeling of a bacterial and fungal biofilter applied to toluene abatement: kinetic parameters estimation and model validation. "Chemical engineering journal", Juliol 2008, vol. 140, núm. 1-3, p. 52-61.
URIhttp://hdl.handle.net/2117/19688
DOI10.1016/j.cej.2007.09.004
ISSN1385-8947