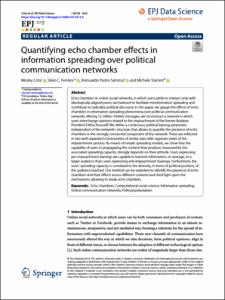 Except where otherwise noted, content on this work is licensed under a Creative Commons license : Attribution-NonCommercial-NoDerivs 3.0 Spain
Abstract
Echo chambers in online social networks, in which users prefer to interact only with ideologically-aligned peers, are believed to facilitate misinformation spreading and contribute to radicalize political discourse. In this paper, we gauge the effects of echo chambers in information spreading phenomena over political communication networks. Mining 12 million Twitter messages, we reconstruct a network in which users interchange opinions related to the impeachment of the former Brazilian President Dilma Rousseff. We define a continuous political leaning parameter, independent of the network’s structure, that allows to quantify the presence of echo chambers in the strongly connected component of the network. These are reflected in two well-separated communities of similar sizes with opposite views of the impeachment process. By means of simple spreading models, we show that the capability of users in propagating the content they produce, measured by the associated spreading capacity, strongly depends on their attitude. Users expressing pro-impeachment leanings are capable to transmit information, on average, to a larger audience than users expressing anti-impeachment leanings. Furthermore, the users’ spreading capacity is correlated to the diversity, in terms of political position, of the audience reached. Our method can be exploited to identify the presence of echo chambers and their effects across different contexts and shed light upon the mechanisms allowing to break echo chambers.
CitationCota, W. [et al.]. Quantifying echo chamber effects in information spreading over political communication networks. "EPJ Data Science", 9 Desembre 2019, vol. 8, núm. 35, p. 1-13.
URIhttp://hdl.handle.net/2117/184169
DOI10.1140/epjds/s13688-019-0213-9
ISSN2193-1127
Publisher versionhttps://epjdatascience.springeropen.com/articles/10.1140/epjds/s13688-019-0213-9
Collections
Share: