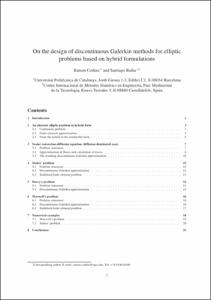 Document typeResearch report
Rights accessOpen Access
All rights reserved. This work is protected by the corresponding intellectual and industrial property rights. Without prejudice to any existing legal exemptions, reproduction, distribution, public communication or transformation of this work are prohibited without permission of the copyright holder
Abstract
The objective of this paper is to present a framework for the design of discontinuous Galerkin (dG) methods for elliptic problems. The idea is to start from a hybrid formulation of the problem involving as unknowns the main field in the interior of the element domains and its fluxes and traces on the element boundaries. Rather than working with this three-field formulation, fluxes are modeled using finite difference expressions and then the traces are determined by imposing continuity of fluxes, although other strategies could be devised. This procedure is applied to four elliptic problems, namely, the convection-diffusion equation (in the diffusion dominated regime), the Stokes problem, the Darcy problem and the Maxwell problem. We justify some well known dG methods with some modifications that in fact allow to improve the performance of the original methods, particularly when the physical properties are discontinuous.
CitationCodina, R.; Badia, S. "On the design of discontinuous Galerkin methods for elliptic problems based on hybrid formulations". 2012.
URIhttp://hdl.handle.net/2117/16921
Collections
Share: