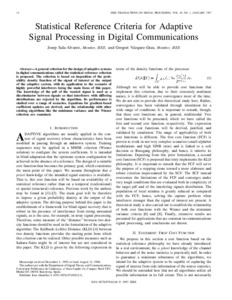 A general criterion for the design of adaptive systems in digital communications called the statistical reference criterion is proposed. The criterion is based on imposition of the probability density function of the signal of interest at the output of the adaptive system, with its application to the scenario of highly powerful interferers being the main focus of this paper. The knowledge of the pdf of the wanted signal is used as a discriminator between signals so that interferers with differing distributions are rejected by the algorithm. Its performance is studied over a range of scenarios. Equations for gradient-based coefficient updates are derived, and the relationship with other existing algorithms like the minimum variance and the Wiener criterion are examined.
CitationSala Álvarez, J.; Vázquez Grau, G. Statistical reference criteria for adaptive signal processing in digital communications. IEEE Transactions on Signal Processing, 1997, vol. 45, núm. 1, p. 14-31.
URIhttp://hdl.handle.net/2117/1569
ISSN1053-587X