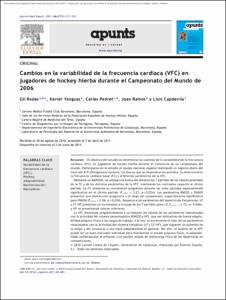 Capdevila, L.
Document typeArticle
Rights accessOpen Access
Abstract
The aim of this study is to determine the changes in heart rate variability (HRV) in field hockey players during the course of a world championship. The Spanish national team took part in the study by making daily records of the R-R interval (Omegawave System) on the days when matches took place. The baseline heart rate (HR) and several parameters of HRV were measured. The evolution of the average values of the HR and the various parameters of HRV during the 7 matches was compared using a MANOVA, the contrasts regarding the last match being analysed. The HR increases progressively during the seven matches, with an especially significant increase in the last match (F(18.6) = 3.27; p=.024). RMSSD and pNN50 parameters progressively decrease throughout the tournament, with an especially significant decrease for pNN50 (F(18.6) = 2.96; p=.034). Regarding the parameters of the frequency spectrum, LF and LF/HF show an increase throughout the 7 matches (for LF, F(18.6) = 2.72; p=.046), and HF presented lower values. HRV decreases progressively and the values of the parameters related to parasympathetic system activity (RMSSD and HF) reduce, which are indicative of good psychic-physical adaptability to the workload. At the same time, the value of the parameters related to sympathetic system activity (LF and LF/HF) increases, suggesting an increase in fatigue, tiredness and poor adaptability in general. Consequently, the analysis of HRV may be a good marker for monitoring the psychic-physical state, cardiovascular adaptability during exercise and a possible state of physical overload in athletes participating in competitions.
CitationRodas, G. [et al.]. Changes in heart rate variability (HRV) in field hockey players during the 2006 World Cup. "Apunts Medicina de l'Esport", Juliol 2011, vol. 46, núm. 171, p. 117-123.
URIhttp://hdl.handle.net/2117/14367
DOI10.1016/j.apunts.2011.04.001
ISSN1886-6581
Publisher versionhttp://www.apunts.org/apunts/ctl_servlet?_f=40&ident=90027045
Collections
Share: