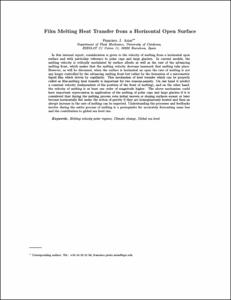 Document typeExternal research report
Rights accessOpen Access
Abstract
In this internal report, consideration is given to the velocity of melting from a horizontal open surface and with particular reference to polar caps and large glaciers. In current models, the melting velocity is critically modulated by surface albedo as well as the rate of the advancing melting front, which makes that the melting velocity decrease inasmuch that melting take place. However, as will be discussed, when the surface is horizontal an open the rate of melting is not any longer controlled by the advancing melting front but rather by the formation of a micrometric liquid film which driven by capillarity. This mechanism of heat transfer which can be properly called as film-melting heat transfer is important for two reasons,namely. On one hand it predict a constant velocity (independent of the position of the front of melting), and on the other hand, the velocity of melting is at least one order of magnitude higher. The above mechanism could have important repercussion in application of the melting of polar caps and large glaciers if it is considered that during the melting process even initial uneven or sloping surfaces sooner or later become horizontally flat under the action of gravity if they are homogeneously heated and then an abrupt increase in the rate of melting can be expected. Understanding the processes and feedbacks involve during the entire process of melting is a prerequisite for accurately forecasting mass loss and the contribution to global sea level rise.
CitationArias, F.J. "Film melting heat transfer from a horizontal open surface". 2019.
URIhttp://hdl.handle.net/2117/133530
Collections
Share: