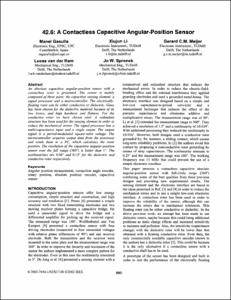 Li, Xiujun
Meijer, Gerard C. M.
Van der Ham, Lucas
Spronck, Jo W.
Document typeArticle
PublisherInstitute of Electrical and Electronics Engineers
Rights accessOpen Access
Abstract
This paper presents an absolute capacitive angular-position sensor with a contactless rotor. The sensor is mainly composed of three parts: the capacitive sensing element, a signal processor, and a microcontroller. The electrically floating rotor can be either conductive or dielectric. For the dielectric material, we chose plastic, and for the conductive rotor, we chose aluminum. The sensing element has a redundant structure, which reduces mechanical nonidealities. The signal processor has a multicapacitance input and a single output, which is a period-modulated square-wave voltage. The microcontroller acquires output data from the processor and sends them to a PC, which calculates the rotor position. Theoretical analysis, supported by experimental results, show that the sensitivity to mechanical nonidealities of the sensing element is higher in the case of a conductive rotor. The resolution of the capacitive angular-position sensor over the full range (360/spl deg/) was better than 1". The measured nonlinearity was /spl plusmn/ 100" and /spl plusmn/ 300" for the dielectric and the conductive rotor, respectively.
CitationGasulla Forner, M.; Li, Xiujun; Meijer, Gerard C. M... et al. A contactless capacitive angular-position sensor. IEEE Sensors Journal, 2003, Vol. 3, No. 5, 607-614
URIhttp://hdl.handle.net/2117/1283
ISSN1530-437X
Collections
Share: