How long are long tandem repeats? A challenge for current methods of whole-genome sequence assembly: The case of satellites in caenorhabditis elegans 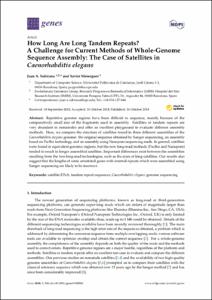 Document typeArticle
Rights accessOpen Access
Abstract
Repetitive genome regions have been difficult to sequence, mainly because of the comparatively small size of the fragments used in assembly. Satellites or tandem repeats are very abundant in nematodes and offer an excellent playground to evaluate different assembly methods. Here, we compare the structure of satellites found in three different assemblies of the Caenorhabditis elegans genome: the original sequence obtained by Sanger sequencing, an assembly based on PacBio technology, and an assembly using Nanopore sequencing reads. In general, satellites were found in equivalent genomic regions, but the new long-read methods (PacBio and Nanopore) tended to result in longer assembled satellites. Important differences exist between the assemblies resulting from the two long-read technologies, such as the sizes of long satellites. Our results also suggest that the lengths of some annotated genes with internal repeats which were assembled using Sanger sequencing are likely to be incorrect.
CitationSubirana, J., Messeguer, X. How long are long tandem repeats? A challenge for current methods of whole-genome sequence assembly: The case of satellites in caenorhabditis elegans. "Genes", 16 Octubre 2018, vol. 9, núm. 10, p. 1-8.
URIhttp://hdl.handle.net/2117/124347
DOI10.3390/genes9100500
ISSN2073-4425
Publisher versionhttps://www.mdpi.com/2073-4425/9/10/500
Collections
Share: