Determination of drag coefficients in a free molecular flow 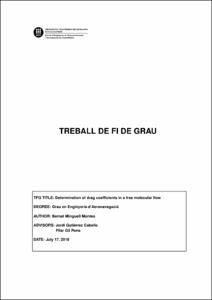 Tipus de documentTreball Final de Grau
Condicions d'accésAccés obert
Abstract
This project aims to study the drag coefficient (CD) for satellites in a free molecular flow. The study is mainly based on Schaaf & Chambre and Schamberg models. These are old models (from 1958), but still are the most widely used nowadays. The two models are analyzed for flat and spherical geometries, considering both specular and diffuse reflection. In order to set the scenario of our study, we describe the thermosphere and justify the interest of studying this region of the terrestrial atmosphere. Then, we describe the specific type of flux considered in this work. The parameters which divide the behaviour of the gases into different regimes, as well as the basic characteristics of the free molecular flow and the interaction between it and the surface of the satellite, are explained. The first model studied is the one by Schaaf and Chambre, considering the two types of reflection for each geometry. We observe that, in the case of flat plate geometry, the angle of attack is the most important parameter for the determination of CD. For the spherical case, we see that CD adopts almost constant values, since the angle of attack is irrelevant due to the geometry, and the temperature does not cause great variations. With respect to Schamberg model we obtain large variations of CD due to variations in the angle of attack, as in the previous model. The case of the sphere also gives a constant CD in the specular case. There is also a clear dependency on the wall temperature for the diffuse and intermediate cases. The values obtained for CD under the diffuse reflection show large discrepancies between models. In fact, Schamberg's model gives values that are at odds with empirical values under certain conditions. For this reason, we also analyze a third model: Sentman's model for diffuse reflection. This model gives results similar to those of Schaaf & Chambre. Additionally, the bibliography points to serious shortcomings of Schamberg's model in the diffuse reflection case and low angles of attack. We have checked the practical necessity of combining these models for different reflection conditions. We have concluded that a first study of CD (and, eventually, of the thermospheric density) should make use of spherical satellites in order to minimize the number of relevant variables, and to better identify the most influential parameters. The problem of launching spherical satellites could be solved by holding them inside a suitable satellite dispenser, perhaps with a CubeSat-like configuration, and release them once in orbit. These satellites dispensers could release either one or several spherical satellites.
MatèriesArtificial satellites, Termosfera, Satèl·lits artificials
URIhttp://hdl.handle.net/2117/121121
Col·leccions
Comparteix: