Teaching engineers in the seventeenth century: european influences in Portugal 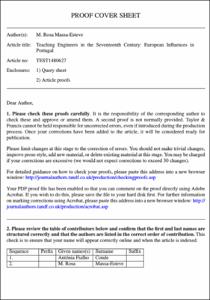 The practice of mathematics underwent a major transformation in the seventeenth century due to new procedures and concepts that also showed their utility for military architecture. The circulation of this knowledge can be found in several works. In this paper, we focus on an early work on Portuguese fortifications, Methodo Lusitanico de Desenhar as Fortificaçoens das Praças Regulares & Irregulares (Lusitanic Method of Drawing Fortifications of Regular and Irregular Military Posts), published posthumously in 1680, the author of which was the leading Portuguese Chief Cosmographer and Chief Engineer, Luis Serrão Pimentel (1613–1679). Methodo Lusitanico was a novel work containing the author’s own theoretical explorations of the art and science of fortification in Portugal arising from the theoretical investigations and military education sponsored by the Portuguese Crown. The aim of our contribution is to show the European influences on Portuguese science in the seventeenth century through the analysis of an early work on modern fortifications written in the Portuguese language and by a Portuguese scholar. As far as the contents of the book are concerned, we show that Serrão Pimentel analyzes and reviews the published methods of fortification, and modifies them by introducing new procedures to improve the use of mathematics in the teaching of engineers. Our analysis also shows that Serrão Pimentel was a leading mathematician and a skillful teacher who had read the main mathematical works published at his time, such as Stevin’s decimal arithmetic, and used them in practice.
CitationFialho, A., Massa, M. Teaching engineers in the seventeenth century: european influences in Portugal. "Engineering studies", 9 Juny 2018, vol.10, núm 2-3, 115-132
URIhttp://hdl.handle.net/2117/119021
DOI10.1080/19378629.2018.1480627
ISSN1937-8629
Publisher versionhttps://www.tandfonline.com/doi/abs/10.1080/19378629.2018.1480627