Is it better to use gate opening as control variable than discharge to control irrigation canals? 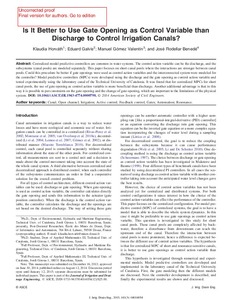 Centralized model predictive controllers are common in water systems. The control action variable can be the discharge, and the subsystems (canal pools) are modeled separately. This paper focuses on short canal pools where the interactions are stronger between canal pools. Could this procedure be better if gate openings were used as control action variables and the interconnected system were modeled for the controller? Model predictive controllers (MPCs) were developed using the discharge and the gate opening as control action variable and tested experimentally using the laboratory canal of the Technical University of Catalonia. It was found that for centralized MPCs for short canal pools, the use of gate opening as control action variable is more beneficial than discharge. Another additional advantage is that in this way it is possible to put constraints on the gate opening and the change of gate opening, which are important to the limitations of the physical system. (C) 2014 American Society of Civil Engineers.
CitationK. Horváth, Galvis, E., Gomez, M., Rodellar, J. Is it better to use gate opening as control variable than discharge to control irrigation canals?. "Journal of irrigation and drainage engineering", Març 2015, vol. 141, núm. 3, p. 04014054-1-04014054-12.
URIhttp://hdl.handle.net/2117/113664
DOI10.1061/(ASCE)IR.1943-4774.0000798
ISSN0733-9437
Publisher versionhttps://ascelibrary.org/doi/10.1061/%28ASCE%29IR.1943-4774.0000798