On the analysis of the quasi-static regime 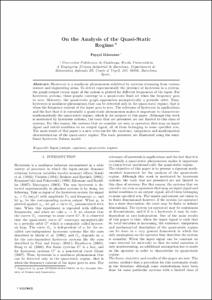 Document typeConference lecture
Rights accessOpen Access
Abstract
Hysteresis is a nonlinear phenomenon exhibited by systems stemming from various science and engineering areas. To detect experimentally the presence of hysteresis in a system, the graph output versus input of the system is plotted for different frequencies of the input. For hysteresis systems, these graphs converge to a quasi-static limit set when the frequency goes to zero. Moreover, the quasi-static graph approaches asymptotically a periodic orbit. Thus, hysteresis is nonlinear phenomenon that can be detected only in the quasi-static regime, that is when the frequency content of the input goes to zero. The relevance of hysteresis in applications and the fact that it is essentially a quasi-static phenomenon makes it important to characterize mathematically the quasi-static regime, which is the purpose of this paper. Although this work is motivated by hysteresis systems, the tools that are presented are not limited to this class of systems. For this reason, the systems that we consider are seen as operators that map an input signal and initial condition to an output signal, all of them belonging to some specified sets. The main result of this paper is a new criterion for the existence, uniqueness and mathematical characterization of the quasi-static regime. The tools presented are illustrated using the semi-linear hysteresis Duhem model.
CitationIkhouane, F. On the analysis of the quasi-static regime. A: Adaptation and Learning in Control and Signal Processing. "ALCOSP 2010". Antalya: 2010.
URIhttp://hdl.handle.net/2117/11051
Collections
Share: