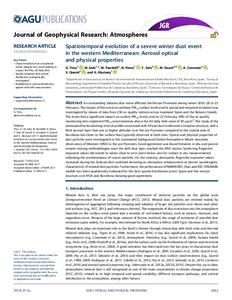 An outstanding Saharan dust event affected the Iberian Peninsula during winter 2016 (20 to 25 February). The impact of this event on ambient PM10 surface levels and its spatial and temporal evolution was investigated by means of data from 250 air quality stations across mainland Spain and the Balearic Islands. The event had a significant impact on surface PM10 levels, and on 22 February, 90% of the air quality monitoring sites registered PM10 concentrations above the EU daily limit value of 50 µg/m3. The study of the attenuated backscattering vertical profiles associated with African dust evidenced a complex structure, with a thick aerosol layer that was at higher altitudes over the pre-Pyrenees compared to the coastal area of Barcelona but closer to the surface than typically observed at both sites. Optical and physical properties of dust particles were investigated at the continental background Global Atmosphere Watch mountain observatory of Montsec (MSA) in the pre-Pyrenees. Good agreement was found between in situ and passive remote sensing methodologies once the aloft dust layer reached the MSA station. Scattering Ångström exponent values decreased to values close to zero (even below zero for surface in situ measurements) indicating the predominance of coarse particles. On the contrary, absorption Ångström exponent values increased during the Saharan dust outbreak denoting an absorption enhancement at shorter wavelengths, characteristic of mineral dust particles. Furthermore, the performance of NMMB/BSC-Dust and BSC-DREAM8b models has been qualitatively evaluated for the dust spatial distribution across Spain and the vertical structure over MSA and Barcelona showing good agreement.
CitationTitos, G., Ealo, M., Pandolfi, M., Perez, N., Sola, Y., Sicard, M., Comeron, A., Querol , X., Alastuey, A. Spatiotemporal evolution of a severe winter dust event in the western Mediterranean: Aerosol optical and physical properties. "Journal of geophysical research: atmospheres", 16 Maig 2017, vol. 122, núm. 7, p. 4052-4069.
URIhttp://hdl.handle.net/2117/104286
DOI10.1002/2016JD026252
ISSN2169-8996
Publisher versionhttp://onlinelibrary.wiley.com/doi/10.1002/2016JD026252/abstract