Option of operating speed for vessels under low-carbon economy 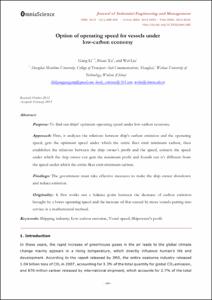 Show full item record
Li, Gang
Xu, Huan
Liu, Wei
Document typeArticle
PublisherSchool of Industrial and Aeronautic Engineering of Terrassa (ETSEIAT). Universitat Politècnica de Catalunya (UPC)
Rights accessOpen Access
Abstract
Purpose: To find out ships' optimum operating speed under low-carbon economy. Approach: First, it analyzes the relations between ship’s carbon emission and the operating speed, gets the optimum speed under which the entire fleet emit minimum carbon, then establishes the relations between the ship owner’s profit and the speed, extracts the speed under which the ship owner can gain the maximum profit and founds out it’s different from the speed under which the entire fleet emit minimum carbon. Findings: The government must take effective measures to make the ship owner slowdown and reduce emission. Originality: It first works out a balance point between the decrease of carbon emission brought by a lower operating speed and the increase of that caused by more vessels putting into service in a mathematical method.
CitationLi, Gang; Xu, Huan; Liu, Wei. Option of operating speed for vessels under low-carbon economy. "Journal of Industrial Engineering and Management", Abril 2013, vol. 6, núm. 1, p. 289-296.
URIhttp://hdl.handle.net/2099/13128
DLB-28744-2008
ISSN2013-0953
Collections
Share: