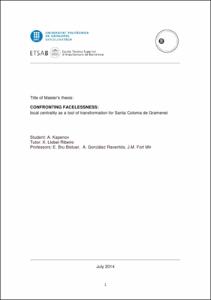 Document typeMaster thesis
Rights accessOpen Access
Abstract
Over the XX century a great number of cities experienced unprecedented growth of population and expansion of their territory. As a result of this process peripheries of many cities became occupied by shantytowns and urban sprawl, faceless and often unstructured settlements. The main aim of the present work is to define a possible way to improve such deteriorated urban environments by the example of the city of Santa Coloma de Gramenet located in Barcelona Metropolitan area. Santa Coloma de Gramenet is an explicit example of a city that underwent a stage of fast uncontrolled growth. Due to mass immigration to Catalonia that took place in the second half of XX century this city housed numerous families of industrial workers. Acute demand for affordable housing caused burst of civil construction during which surrounding territory was intensively urbanized. Developers working here were acting independently, without any kind of coordination, not taking in account the city as a whole, hence collective interests were neglected in favor of private ones. As a result of such unrestricted growth present Santa Coloma lacks unifying structure, it is a territory without a model. The urban fabric of Santa Coloma consists of numerous patches characterized by different grids and patterns. Tension between patches with different grids produces conflicting areas - points of discontinuity, areas where urban fabric loses coherence and open space is presented as a merely residual land left after urbanization. In order to improve urban form of Santa Coloma we propose to affect exactly these points. We propose to create in these deteriorated areas a net of local centers by inserting there new buildings with diverse programs. These centers will become places where citizens are able to find different public services and amenities within walking distance. Moreover, each center will acquire certain identity and character by creating an impressive public space, a scenery of social life. In order to elaborate conditions generating identity we examine urban space as a combination of its elements. After definition of basic constituent parts we try to formulate a pattern of characteristics that would be presented in each of local centers. This recurring set of signs will endow urban space of Santa Coloma with recognizable familiarity. As a result of this transformation the city of Santa Coloma will obtain distinctive identity and will become more meaningful for its citizens. The network of new urban spaces will facilitate navigation and give the city a clear image. Facilities concentrated in new nuclei of urbanity will promote social interaction and encourage creation of tight-knit communities. Generally the set of aforementioned measures is intended to change existing peripheral status of Santa Coloma and to turn it into self-contained urban entity. Nowadays in developed countries dynamics of urban expansion slowed down whereas improvement of existing environments is becoming primary objective. Considering this, the strategy and methods of transformation for shapeless areas will remain relevant for future development of peripheral territories throughout the world.
SubjectsSociology, Urban -- Spain -- Santa Coloma de Gramenet, Urban renewal -- Spain -- Santa Coloma de Gramenet, Sociologia urbana -- Catalunya -- Santa Coloma de Gramenet, Rehabilitació urbana -- Catalunya -- Santa Coloma de Gramenet
DegreeMÀSTER UNIVERSITARI EN TEORIA I PRÀCTICA DEL PROJECTE D'ARQUITECTURA (Pla 2009)
Location
1: Santa Coloma de Gramenet, Barcelona, Espanya
URIhttp://hdl.handle.net/2099.1/23016
Collections
Share: