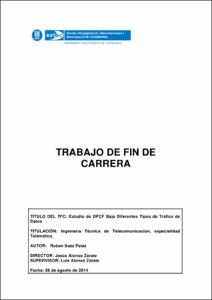 ; Alonso Zárate, Jesús
Document typeBachelor thesis
Rights accessOpen Access
Abstract
With the tremendous success of WLAN technology for wireless local area networks, people are eager to access all kinds of multimedia applications through their wireless devices, on the move, and at all times. This is causing significant changes in the nature of traffic generated in the network. The current access networks must support heterogeneous traffic for which they have to ensure minimum performance quality of service (QoS). In addition, M2M applications are having a huge increase, growing at a rate of nearly 40 percent per year between 2010 and 2013. To cope with such demanding scenario, recent research works have provided new communications mechanisms that improve the performance of wireless communications. An example of such contributions is the MAC protocol (medium access control) called Distributed Point Coordination Function (DPCF) which outperforms legacy communication protocols used at the MAC layer of WLANs. This project studies the performance DPCF protocol for different traffic types, taking into account the need for coexistence between high traffic demand (e.g. streaming), and emerging M2M traffic, which is posing a challenge for the operation of communications networks. Performance evaluation of the protocol for different types of traffic has been evaluated through the MACSWIN simulator. This simulator allows for simulations of wireless communications for different MAC protocols. This has revealed the performance of each type of traffic in terms of throughput and transmission delay, and has allowed comparing the results of DPCF under different traffic models with those of legacy IEEE 802.11 networks. The results of the simulations have shown how the MAC protocol DPCF improves the throughput and transmission delay of the MAC DCF and PCF, protocols defined by the IEEE for WLAN.
SubjectsComputer network protocols, Protocols de xarxes d'ordinadors
DegreeENGINYERIA TÈCNICA DE TELECOMUNICACIÓ, ESPECIALITAT EN TELEMÀTICA (Pla 2000)
URIhttp://hdl.handle.net/2099.1/22952
Collections
Share: