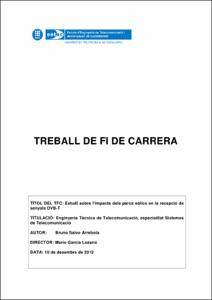 Document typeBachelor thesis
Rights accessOpen Access
Abstract
The main aim of this project was to perform a study how the DVB-T (Digital Video Broadcasting - Terrestrial) signal reception is being affected by the wind farms. This analysis was carried out from two different perspectives, the first one by simulations and following the methodology proposed by Abertis Telecom. As this method has been developed from laboratory tests, the second part consists of performing several empirical measurements using Promax TV Explorer HD + tool. Thus, the TFC was structured as follows: · Presentation of the DVB-T signal, with the improvements achieved comparing to the old analog signal. Examples of the problems that the analog signal was suffering were presented and how they were solved once the new system was installed. The characteristics and possibilities of the standard DVB-T were presented and likewise, which of them were chosen for planification in Spain. Then a link budged was executed to justify the limits that were chosen during the performance of the simulations. · Afterwards has been done a link budged according to the DVB-T Spanish configuration in order to justify the thresholds chosen in the simulations. · A second chapter consisted of an introduction to the wind farms energy (advantages and drawbacks). The different types of wind turbines were presented, focusing on those which are used in wind farms and also it was defined which level of affectation to DVBT- analog signal they can present. · Next step was to carry out the study of the affectation of the "Serra de Rubió II" wind farms (real case) using the commercial software Sirenet. This study was performed following the methodology defined by Abertis Telecom. · Subsequently several measurements were made at the wind farms, where the simulation took place. Thus, it became possible to verify the reliability of the predictions that were made, and equally to present improvements in case some imbalances between the simulated situation and the series of measurements, were found. · As the last step, it contains different kind of effects that wind farms have against the DVB-T. Specifically on his radiocommunication services and remissions centers. It has been solved by Sirenet Simulation (case of Serra de Rubió II). · Finally, the document closes with conclusions of the work performed and possible future improvements.
SubjectsDigital Video Broadcasting (Project), Televisió digital terrestre
DegreeENGINYERIA TÈCNICA DE TELECOMUNICACIÓ, ESPECIALITAT EN SISTEMES DE TELECOMUNICACIÓ (Pla 2000)
URIhttp://hdl.handle.net/2099.1/17310
Collections
Share: