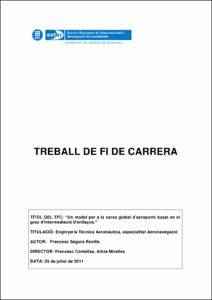 ; Miralles de la Asunción, Alicia
Document typeBachelor thesis
Rights accessOpen Access
Abstract
Many real networks as the World Wide Web, the telephone and electrical networks and transportation (including air routes), biological or social systems belong to a category called ―small-world scale-free‖. The features of these networks are a huge local node concentration, also called clustering (this means that the nodes have lots of common neighbours) and at the same time they have a small diameter (the maximum distance between two pair of nodes); and also the fact that the number of links in a node follows a power law. In this TFC we study the characteristics of the global network of airports and we model this network through an optimization process starting from a lattice network with a similar number of nodes and links. For this study we use Python ( version 2.7) and the package NetworkX (v 1.4) designed for the study of networks. In the first part of this TFC we analyze the properties of the airports network and verify that it is a small world scale free network. In the second part we consider models obtained from a toroidal grid by randomly changing links while optimizing a certain cost function (based on distance and traffic). The results of the tests show that the networks obtained do not follow the expected degree distribution and are similar to random networks. In conclusion we can say that modeling the airports network requires a more complex study with a more elaborated cost function and the inclusion of other parameters accounting for the evolution processes that has followed the original network.
SubjectsAirports -- Communication systems, International airports, Aeroports -- Sistemes de comunicació, Aeroports internacionals
URIhttp://hdl.handle.net/2099.1/12731
Collections
Share: