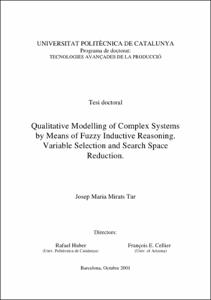 Fuzzy Inductive Reasoning (FIR) is a modelling and simulation methodology capable of generating a qualitative input-output model of a system from real-valued trajectories of its physical variables. The functioning basis of FIR is to qualitatively learn the behaviour of a system from its past real data. This is an interesting feature when dealing with ill-defined, usually large-scale systems, for which an accurate description is not available but only data trajectories of the process.
FIR finds in a (huge) search space model the so-called optimal mask that indicates which variables best explain any given output. Unfortunately, any algorithm that can find the optimal mask is necessarily of exponential complexity, i.e., the number of masks to be visited grows exponentially with the number of available input variables. This makes the FIR methodology, in its actual implementation, impractical for those cases in which it would be most useful, i.e., large-scale systems.
The thesis discusses whether sub-optimal search algorithms or methods of pre-simplifying a large-scale system are most suitable for dealing effectively and efficiently with the problem of deriving qualitative FIR models for them. The mask search space of FIR must be reduced in order to compute a model of a large-scale system in an affordable amount of time. To this aim, basically two lines of thought are given in the present dissertation. The first one is to directly simplify the candidate mask that is proposed to FIR. This can be done either directly, by reducing the number of input variables to the FIR model, or indirectly, using sub-optimal mask search algorithms. Two new sub-optimal mask search algorithms are proposed. The first method is another variant of a hill-climbing technique, which results in a high-quality mask while still converging in polynomial time. The second method is a new variant of a statistical approach that is based on spectral coherence functions.
The second line of research in this dissertation is to obtain a decomposition of the system into subsystems. This would allow obtaining a model of the system from its subsystems, which in turn reduces the computational time needed for the overall effort. Given a k-variable system, the cost of computing a unique k-variable model is much higher than computing a set of p models of jp < k variables.
With these complementary lines of work, two complete methodologies can be proposed, each of which enables the construction of qualitative models of complex systems. The former, based in simplifying the number of potential inputs to the FIR models, is an energy-based method, capable of detecting the variables at given delays that are more closely related to the considered output of the system. The latter proposes a decomposition of the overall system into subsystems. With the research presented in this thesis, the FIR modelling capabilities have been extended with capabilities for modelling large-scale systems within a reasonable time.
CitationMirats Tur, J. M. (Josep M. "Qualitative modelling of complex systems by means of fuzzy inductive reasoning. Variable selection and search space reduction.". Tesi doctoral, UPC, Departament d'Enginyeria de Sistemes, Automàtica i Informàtica Industrial, 2001. Available at: <http://hdl.handle.net/2117/93492>
URIhttp://hdl.handle.net/2117/93492
DLB.2945-2002
ISBN8469969501
Other identifiershttp://www.tdx.cat/TDX-1210101-083254