Analysis of the social effort in multiplex participatory networks 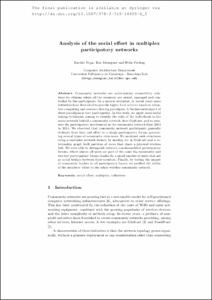 Document typeConference report
PublisherSpringer
Rights accessOpen Access
Abstract
Community networks are participatory connectivity solutions for citizens where all the resources are owned, managed and controlled by the participants. As a natural evolution, in recent years some initiatives have flourished to provide higher level services based on volunteer computing and resource sharing paradigms. A fundamental aspect of these paradigms is user participation. In this work, we apply some social mining techniques aiming to identify the roles of the individuals in the social network behind a community network, here Guifi.net, and to measure the participatory involvement in the community network from 2003 to 2014. We observed that community network participants generally dedicate their time and effort to a single participatory forum, generating several types of community structures. We analyzed such structures using a multiplex network formed by mailing list in Guifi.net and a relationship graph built pairwise of users that share a physical wireless link. We were able to distinguish between non-hierarchical participatory forums, where almost all users are part of the same big community and two-tier participatory forums leaded by a small number of users that act as social bridges between their members. Finally, by testing the impact of community leaders in all participatory layers, we profiled the utility of the members’ effort to the whole wireless community network.
CitationVega, D.; Meseguer, R.; Freitag, F. Analysis of the social effort in multiplex participatory networks. A: International Conference on the Economics of Grids, Clouds, Systems, and Services. "Economics of grids, clouds, systems, and services: 11th International Conference: GECON 2014: Cardiff, UK, September 16-18, 2014: revised selected papers". Cardiff: Springer, 2014, p. 67-79.
URIhttp://hdl.handle.net/2117/27554
DOI10.1007/978-3-319-14609-6_5
ISBN978-3-319-14608-9
Publisher versionhttp://dx.doi.org/10.1007/978-3-319-14609-6_5
Collections
Share: