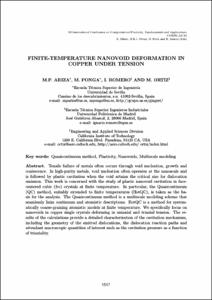 Show full item record
Ariza, M.P.
Ponga, M.
Romero, I.
Ortiz, M.
Document typeConference report
PublisherCIMNE
Rights accessOpen Access
Abstract
Tensile failure of metals often occurs through void nucleation, growth and coalescence. In high-purity metals, void nucleation often operates at the nanoscale and is followed by plastic cavitation when the void attains the critical size for dislocation emission. This work is concerned with the study of plastic nanovoid cavitation in facecentered cubic (fcc) crystals at ﬁnite temperature. In particular, the Quasicontinuum (QC) method, suitably extended to ﬁnite temperatures (HotQC), is taken as the basis for the analysis. The Quasicontinuum method is a multiscale modeling scheme that seamlessly links continuum and atomistic descriptions. HotQC is a method for systematically coarse-graining atomistic models at ﬁnite temperature. We speciﬁcally focus on nanovoids in copper single crystals deforming in uniaxial and triaxial tension. The results of the calculations provide a detailed characterization of the cavitation mechanism, including the geometry of the emitted dislocations, the dislocation reaction paths and attendant macroscopic quantities of interest such as the cavitation pressure as a function of triaxiality.
CitationAriza, M.P. [et al.]. Finite-temperature nanovoid deformation in copper under tension. A: COMPLAS XI. "COMPLAS XI : proceedings of the XI International Conference on Computational Plasticity : fundamentals and applications". CIMNE, 2011, p. 1517-1526.
URIhttp://hdl.handle.net/2117/184519
ISBN978-84-89925-73-1
Collections
Share: