After planning, the production of radical social space in Barcelona : real-estate financial circuit and (De Facto) right to the city 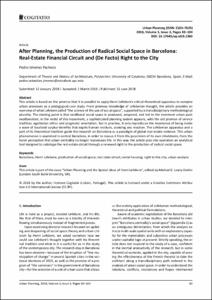 Show full item record
Jiménez-Pacheco, Pedro
Document typeArticle
Rights accessOpen Access
Abstract
This article is based on the premise that it is possible to apply Henri Lefebvre’s critical-theoretical apparatus to complex urban processes as a pedagogical case study. From previous knowledge of Lefebvrian thought, the article provides an overview of what Lefebvre called “the science of the use of social space”, supported by a transdisciplinary methodological plurality. The starting point is that neoliberal social space is produced, prepared, and led to the imminent urban post-neoliberalism, in the midst of this movement, a sophisticated planning system appears, with the old promise of service tradition, egalitarian ethics and pragmatic orientation. But in practice, it only reproduces the impotence of being inside a wave of localized surplus-benefits that expels human residues, avoiding any reaction. The Lefebvrian apparatus and a part of its theoretical tradition guide the research on Barcelona as a paradigm of global real-estate violence. This urban phenomenon is examined in central Barcelona, in order to rescue it from the pessimism of its own inhabitants, from the harsh perception that urban centrality no longer reproduces life. In this way, the article puts into operation an analytical tool designed to sabotage the real-estate circuit through a renewed right to the production of radical social space.
CitationJiménez-Pacheco, P. After planning, the production of radical social space in Barcelona : real-estate financial circuit and (De Facto) right to the city. "Urban Planning", 1 Gener 2018, vol. 3, núm. 3.
URIhttp://hdl.handle.net/2117/121336
DOI10.17645/up.v3i3.1360
ISSN2183-7635
Publisher versionhttps://www.cogitatiopress.com/urbanplanning/article/view/1360
Collections
Share: